As the name implies Just a Game is one of those type of games that doesn’t need a fancy story or an introduction. All you have to do is to choose one of the six available characters, defeat all the creatures you encounter and eventually battle powerful bosses. 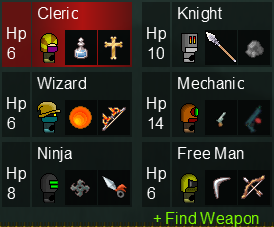 Sadly, this game is relatively short so there’s not much I can review. This free indie game doesn’t feature any special graphics, or gameplay features yet it managed to keep me pretty entertained. In Just a Game you don’t need to read a storyline, complete quests or any of that; you simply jump in and begin killing stuff.

Most of the time I chose to blast away monsters and bosses with the mechanic, which is the easiest of the characters. Still, even though the mechanic is the easiest of the characters the game was pretty challenging. Really, the first boss you battle is pretty lame, but they get harder to kill and their attacks get more interesting. The same goes for the monsters, they start extremely easy, but get harder as you go. Really, the most challenging part of this game is dodging. If you’re good at dodging attacks, then you will probably be pretty good at this game!

Anyway, the only negative side of the game that I can think of, is that you can’t remap the keys. While the current controls aren’t too bad, I think it would be nicer to have the space bar as the jump key. Also, it should be noted that the controls in the ReadMe file are completely different from the controls in-game.

So yeah. “Just a Game” is a nice little indie game. It’s pretty short, but you will be entertained by it. Definitely give it a download if you got the time!